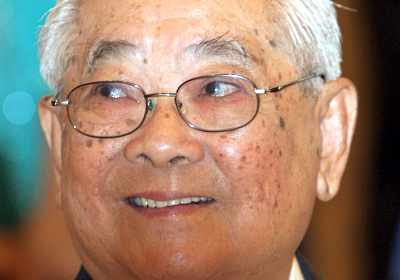 Quote from Tun Dr. Mahathir:
1. We know that we must all leave this life one day. But knowing the inevitabilty of death cannot stop us from grieving over the passage of a great man, no matter how long he may have lived.

2. As a nationalist, as a friend, as a compatriot, I feel saddened by the passage from this life of Tun Dr Lim Chong Eu.

3. Except for Tun Razak, Tun Lim contributed most to the formation of the National Front, the coalition which succeeded the Alliance, ruled and developed Malaysia until today. He responded postively to the proposal by Tun Razak to rejoin the coalition for the good of Malaysia. He rose above many of the grievances which had led him to leave the MCA, to become a junior partner even though he had been victorious. He was content to be just a Chief Minister of Penang.
4.It was as a Chief Minister that he made Foreign Direct Investment a by-word in Malaysia and perhaps in the world. He brought the first foreign investments in electronics to Penang. It was the best thing for overcoming unemploymnet which had plagued Malaysia till then.

5. It was he who made the Penang the centre for the transformation of Malaysia into an industrial nation. Towards this end he was tireless, almost single-handedly contacting and persuading foreign industrialists to invest in the new electronics industry. So successfull was he that very quickly Penang was short of workers and other states benefitted from his effort at creating employment.

6. I worked closely with Tun Lim and always found him open to proposals on the development of Penang and Malaysia. When he lost in the 1990 elections, it came as a shock to me. I had thought that the people of Penang would remember his services and overcome partisan sentiments. But I suppose I was hoping for far too much.

7. Malaysia, and I dare say Penang, has lost a great leader with the passing away of Tun Dr Lim Ching Eu.

8. I offer my condolences to Toh Puan Goh Sing Yeng and all the members of Tun Lim's family.